Past-progressive tense verbs express continuing actions that were happening at some point in the past or express a continuing past condition.

The past progressive tense is created with the auxiliary past tense

be(was, were) plus a present participle (verb with an ing ending).

The PAST PROGRESSIVE TENSE indicates continuing action, something that was happening, going on, at some point in the past. This tense is formed with the helping 'to be' verb, in the past tense, plus the present participle of the verb (with an -ing ending): I was riding my bike all day yesterday.

I was studying for my exam last night.

We were beginning to think that you would not show up.

John and Brian were being disruptive in class yesterday.

The above examples are in active voice. The examples below are in passive voice. Passive voice in the past progressive tense is created with the auxiliary past tense be (was,were) plus the present participle be (being) plus a past participle. To avoid wordiness, writers should limit the use of passive voice. 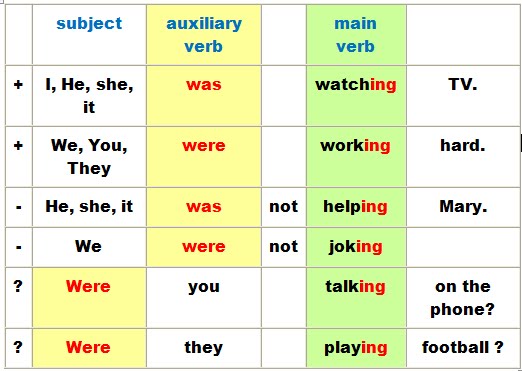 Before dinner, the guitar was being playedby Maggie.