Every language has its own way of saying something happened in the past, is happening now or will happen in the future. As you know, English does this through verb tenses.

By now in your English studies, you have heard and seen the past participle countless times. You just may not have known what it was called. In fact, I used it a few times in this paragraph alone.

The past participle is everywhere so let me begin with a quick discussion about recognizing it.

Most English verbs are regular, so most of their past participles are identical to the past tense.

But for irregular verbs, the past participles and past tenses are not the same. Think of the verb “take” as an example. Its past tense is “took,” as in “I took my mother to the park.” The past participle is “taken,” as in “She has taken that flight many times.”

OK, now let’s get into today’s subject: the three uses for past participles.

The first we will look at is perfect verb tenses.

As a reminder, a perfect tense is one that puts some form of the verb “have” before its main verb. Take one of my examples again:

She has taken that flight many times.

I used the present perfect tense, which is have or has + past participle.

Knowing the name of this or other verb tenses is not important for today’s lesson. The thing to remember is this: All perfect tenses in English include the past participle.

Listen for it in this next example:

She had studied English before moving to the U.S.

The speaker used the past participle “studied” as part of the past perfect verb “had studied.”

Again, do not worry if you do not know the names of these verb tenses. Simply note that they are perfect tenses and perfect tenses use past participles.

Next, let’s talk about the passive voice – the second use for the past participle.

Here is a quick refresher:

But sometimes the subject is acted upon or receives the action of the verb. This is called the passive voice. Imagine that someone steals your bike. You could say, “My bike was stolen.” There is no mention of the person because you do not know who did it.

We can use passive voice when we do not know who or what performed the action or when identifying the performer is not important.

In English, the most basic passive voice is formed with be + past participle. Let’s examine the bike example:

My bike was stolen.

Here, the verb “be” appears in the past tense “was.” And “stolen” is the past participle of “steal.”

Listen for be + past participle in this next example:

The dishis cooked over an open fire.

Here, the verb “be” is in the present tense “is.” “Cook” is a regular verb, so its past participle is “cooked.”

List of mexican taboos. And, finally, we turn to adjectives – the third use for past participles.

Only some past participles can be used as adjectives. These adjectives are a little different from normal ones because they generally describe how someone feels.

The adjective “bored” is a good example. If you wanted to describe this feeling in a group of children, you could say this:

The children are bored.

Notice that the adjective comes after the linking verb “be.” You can learn more about linking verbs on earlier programs.

Now, suppose these same children begin to misbehave. You could say this:

The bored children are getting into trouble.

Here, the speaker put the adjective “bored” before the noun “children.”

When past participles act as adjectives, they appear in the same places as normal adjectives – after linking verbs and before nouns. But, note again that these kinds of adjectives describe a person or people’s feelings.

And that’s Everyday Grammar for this week.

Alice Bryant wrote this story for Learning English. Caty Weaver was the editor.

tense – n. a form of a verb that is used to show when an action happened

passive voice – n. a way of writing or speaking that uses passive verbs

paragraph – n. a part of a piece of writing that usually that begins on a new line and often is made up of a few sentences

regular – adj. following the normal patterns by which word forms

mention – n. to talk about, write about, or refer to something or someone, especially in a brief way

dish – n. food that is prepared in a particular way

bored – adj. tired and annoyed you are unoccupied or do not have interest in your current activity.

linking verb – n. a verb (such as be, appear or become) that connects a subject with an adjective or noun that describes or identifies the subject

Now, you try it! Find a few past participles in my story that were not used in any of the examples. Write your answers in the comments section.

Example: By now in your English studies, you have heard and seen the past participle countless times.

Some English learners -- and native English speakers -- mistake the past tense with the past participle.

These mistakes generally only happen with irregular verbs since, again, the past tense and past participle of regular verbs are identical. They both end in -ed.

Main verbs have meaning on their own (unlike helping verbs). There are thousands of main verbs, and we can classify them in several ways: 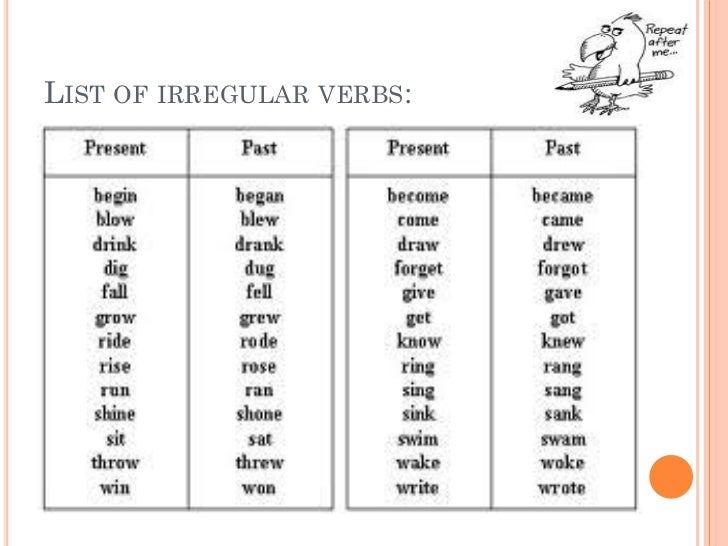 regular verbs: base, past tense, past participle

irregular verbs: base, past tense, past participle

A catenative verb is a main verb that can be followed directly by another main verb. In the following sentences, want, help, like are catenative.