Do you like watching American television? Want to learn English at the same time you’re laughing? Then learning English by watching television is right for you.

One good show to watch is Modern Family. In this article, I’ve written down some American cultural references and explained some jokes from episode 1 of season 7, called ‘Summer Lovin‘.’ And right there in the title there’s a cultural reference. It refers to the song Summer Nights from the movie Grease, where they sing about ‘summer lovin’, which is just another name for the romance that happens during summer break.

While you watch, keep this page open and take a look when you get confused. Or you can read through it after your done watching. Both are helpful ways to get more English learning out of an enjoyable experience watching a hilarious show.

0:05
Cam – “He says it’s urgent.”
Cam is trying to say the word ‘urgent’, but he is wearing braces so he’s hard to understand. The other family members hear the words ‘surgeon’ and ‘sturgeon’ instead.

0:39
Phil – “Claire, I think I know the look of love in another man’s eyes.”
This implies that Phil is also attracted to men and has looked into the eyes of a man that loved him.

0:49
Luke – “I thought you were the beach he likes.”
Luke is using the fact that ‘beach’ and ‘bitch’ sound very similar. ‘Beach’ is a place with sand by the ocean, while ‘bitch’ is a derogatory term for someone, normally used for women.

2:15
Mitchell – “You walked over here. I just thought you Uber-ed everywhere.”
Uber is a company that offers a taxi-like service. It functions just like a taxi, except that normal people can be the drivers and there is an app that works quite well. It’s used around the world, but is especially popular in the US.
Mitchell is implying that Cam spends too much money on things that are unnecessary, like taking an Uber when he could easily walk somewhere.

3:40
Alex – “Hey, do you want to go quiz me on the periodic table.”
Alex’s Boyfriend – “Oxygen, Potassium”
The periodic table, also known as the periodic table of the elements, lists all of the chemical elements. Each element has a one or two letter symbol. The symbol for oxygen is O, and the the symbol for potassium is K. Therefore, put together, oxygen and potassium make the word OK. Instead of just saying the word ‘OK’, he made a nerdy chemistry joke to tell her OK.

3:48
Haley – “That was fun for me.”
Haley is being sarcastic. As she is heartbroken, seeing her sister so in love isn’t fun for her. 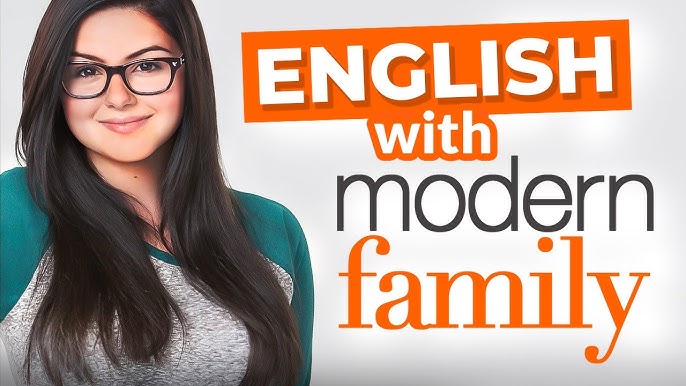 3:50
Haley – “Mom, can we drink now?”
Claire – “It’s lunch time.”
Haley – “Aw”
Claire – “That’s a yes!”
They are making a joke about drinking alcohol. Haley is ready to start drinking alcohol to feel better, but she is worried that it’s too early. Her mom says it’s lunchtime (about 12 or 1 pm), and Haley thinks that her mom means it’s too early. But then Claire corrects her and says that she meant it was ok too start drinking for the day since it was already lunch time.

4:06
Luke – “Please, that’s the saddest blanket since the AIDS quilt”
The AIDS quilt is a memorial to people who have died from AIDS, which is definitely a sad thing. Luke is saying that the quilt Haley and Claire are making is extremely sad and pathetic, and that the only quilt in the world that is sadder is the AIDS quilt.

4:19
Pity Party
A pity party is when someone wants other people to feel sorry for them.

4:25
Jay – “I know you can’t tell me, but that B. Willis Jungle Gym — that’s Bruce Willis, right? His kid goes here?”
Teacher – “Well, we do pride ourselves on privacy here at Davenport, but, uh, you may have a “sixth sense” about this.”
Jay is impressed that Bruce Willis, a famous actor, has a kid at the school. She doesn’t say directly that his kid attends the school, but she makes a reference to “The Sixth Sense,” a famous movie starring Bruce Willis.

4:57 –
Manny – “… making one of my nurples purple”
A purple nurple is grabbing another person’s nipple and then squeezing and twisting it. This causes it to bruise and become purple. It’s sometimes done among friends, but is often used as a way to bully other people. In this case, Manny is being bullied by a student who used to attend this nursery school.

5:10 –
Teacher – “I can’t say who, but it is ironic that he couldn’t use a hammer, and now we ‘can’t touch this.’”
Gloria – “You keep saying you can’t say, and then you say.”
Teacher – “It’s just nice to talk to adults.”
The teacher is inferring that the parent who built the cubbies is MC Hammer. He was a famous rapper in the 90s whose most popular song was “Can’t Touch This.” Gloria then implies that the teachers says she can’t say who the parents are, but then does it anyways. The teacher then implies that she spends the whole day with children and that it’s just nice to talk with adults instead.

Past perfect tense fill in the blanks. 5:35 –
Teacher – “The Learnin’ Barn”
The teacher means the Learnin’ Barn, meaning ‘learning’. But Gloria misinterprets it as “learn in barn”, like learning IN a barn, as opposed to outside the barn. Where she’s from, they actually learned in a barn, but it wasn’t big enough for everyone.

6:46 –
Claire – “Movie”
Dylan – “Nice try, but not all v-words work Mrs. D.”
Clair is trying to remind Haley that they wanted to see a movie (and more importantly, not see Dylan, since she doesn’t want Haley to get back together with him). Dylan stupidly thinks she is just saying words that have a V in them so they could be used in his V-neck t-shirts.

7:15 –
Cam – “I’m very proud of you and your grapefruit.”
Mitchell – “Chrysler Building.”
Cam doesn’t know what the painting looks like and guesses that it is a fruit. Instead, Mitchell corrects him and says it’s the Chrysler Building, a famous skyscraper in New York City. It is making fun of how bad Mitchell is at painting.

7:49 –
Cam – “Crazy like that fox I told Mitchell was chicken.”
“Crazy like a fox” is a saying in English which implies that someone is clever even though they may appear to be foolish at first glance. He is making a reference to the ‘fox hunting’ comment he made 25 seconds ago. He killed a fox and fed it to Mitchell, saying it was chicken (since it’s weird to eat fox in the US).

8:23 –
Old Boss – “I miss that 3 dollar bill.”
This references a derogatory, old-fashioned saying (“queer as a 3 dollar bill”) to refer to people who are homosexual. “Queer” originally meant weird, but later was used to describe people who don’t fit into typical heterosexual roles. Since 3 dollar bills don’t exist, the saying came to be. Making fun of people for their sexual orientation is not seen as OK anymore. Cam is insulted, but he can’t say anything because he wants the old boss to offer Mitchell a job.

9:03
Phil – “They loved it at the deli. They were kvelling”
The shirt says “Oy Vey”, which is a Yiddish (a language used by Jewish people) saying used to imply that you are grieving or upset about something. He wore it at a (presumably) Jewish deli and they were happy about it (kvelling is a Yiddish word meaning ‘to be happy or proud’).

9:16 –
Phil – “You’ve done a real Mitzvah, buddy.”
Andy – “I hope that’s good.”
Continuing with the Jewish t-shirt theme, Phil uses the word “Mitzvah”, which is Yiddish for “a good deed.” It isn’t something he would normally say, since he’s not Jewish and doesn’t speak Yiddish. Andy is also not Jewish and doesn’t understand what Phil means, but hopes that it’s a compliment (which it is).

9:57
Teacher – “…and planted beans”
Jay – “Let me guess. And killed a giant”
Jay is making a reference to Jack and the Beanstalk, a popular fairy tale. In the story, Jack plants magic beans, which allow him to go up to a cloud, where he meets a giant and eventually kills him.

13:34
Andy: All right.
Mmm.
Happy Fourth.
I am so fine.
Happy Fourth means “Happy Fourth of July.” The Fourth of July is another name for the US’s Independence Day, where the country celebrates it’s birth. It usually means barbecues and fireworks, hopefully on a bright sunny day.

14:30
Claire: What happened to your ear, Van Gogh?
Van Gogh is a famous artist from the Netherlands who also famously cut his own ear off.

15:48
Alex: Which he said he admires. I think. It was hard to hear him with all the John Legend and the sobbing.
Apparently Sanjay was listening to music from John Legend, an American singer known for singing very romantic and heartfelt music.

16:28
Haley: Uh, Dylan, could you make me a plate?
Dylan: If I can make a bong out of a carrot, I think I can make you a plate.
“To make a plate” can mean both to physically create a plate and to put a bunch of food on a plate. A bong is a device used to smoke marijuana, and apparently Dylan made one out of a carrot.

18:20
Jay: You’re having a mid-life crisis.
Mitchell: Oh, my god.
Jay: Some guys, ­it’s fast cars and women. Me, it was golf. You, it’s just a little gayer.
Jay: I know like 10 lesbians who could out-golf you.
A mid-life crisis is something that happens to a lot of people when they are about 40 or 50 years old. They start to feel less confident and more anxious. Some people respond by drastically changing something in their life or doing something to “prove” they are still young and capable.
Jay is making a homophobic joke that painting is “gay-er” than golf. And Mitchell throws it right back in his face that he knows 10 lesbians (who are also gay) that are better at golf than him.

18:43
Jay: And one day, during the big club tournament, I hooked a seven-iron out of bounds.
I got so pissed that I wrapped the club around a tree and drove the golf cart off the little bridge into the lake.
Jay hit a bad shot, broke his golf club (the thing you hit the ball with), and drove the cart (little car thing) into the lake.

20:10
Haley: Then I guess it’s a good thing that we didn’t get together.
Andy: Best decision I ever made!
Haley: Samesies!
‘Samesies’ is an expression that comes from the word ‘same’, as in he believes the same thing that she just said. It’s usually said by kids (which makes it funny that Andy, an adult, is saying it, especially when they are in a heated argument). 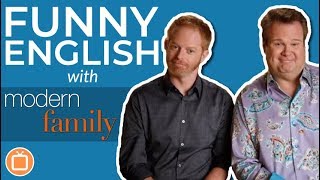 What next? Keep on laughing and learning!

Want to be updated when I produce more episode guides and sitcom explanations?